The Greek Archipelago takes up 7,500 Km of the country’s total of 16,000 Km coastline, offering a highly diversified landscape of both sand and pebble beaches, sheltered bays and coves, coastal caves with steep rocks, and dark sand typical of volcanic soil and coastal wetlands. 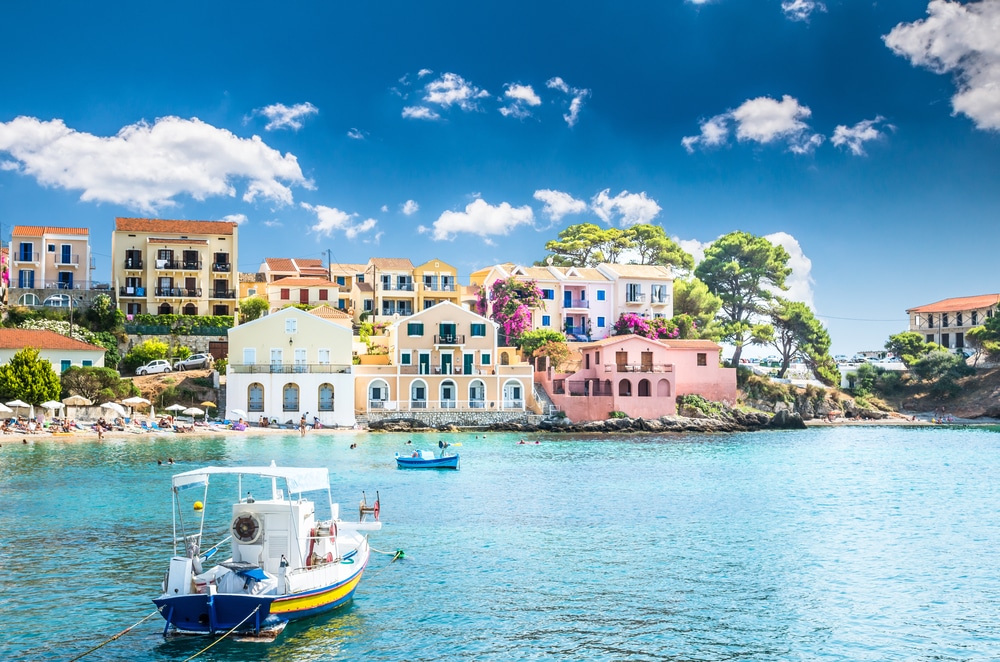 Greece enjoys one of Europe’s warmest climates, with April, May, September and October being ideal times to visit. Southern Greece can be up to four degrees warmer than the north.

Greece has a Mediterranean climate with plenty of sunshine, mild temperatures and a limited amount of rainfall. Due to the country’s geographical position, its rugged relief, and its distribution between the mainland and the sea, there is great variation in Greece’s climate.

Traditionally Greece was an agricultural country, but today the importance of agriculture is declining, and tourism is Greece’s biggest industry, with shipping second.

An important percentage of Greece’s income comes from tourism. In 2009, Greece had over 19.3 million tourists, and in 2011, Santorini was voted as ‘The World’s Best Island’ in Travel & Leisure Magazine, with Mykonos, its neighbouring island, taking fifth place.

Crete, Rhodes, Corfu, the Dodecanese and the Cylades are some of the famous and popular islands and island clusters in Greece.

The crime rate in Greece is one of the lowest in the European Union, but while violent crime is rare, petty theft, car theft and burglaries are on the rise, mostly in central Athens.

Healthcare in Greece is delivered by a mix of public and private health service providers, and the system is broadly divided into primary, secondary and tertiary tiers of service delivery.

Public hospitals in Greece are still generally adequate and there are still professionals who do their best to deliver quality care. The biggest downside is week-long waiting periods in order to receive care.

Most medical staff in Greece will speak some level of English, though this may differ based on their position and the location of the hospital. A doctor in Thessaloniki is more likely to speak English than a nurse in Preveza, for instance. Emergency care in Greece is free of charge regardless of one’s nationality. However, unless an expat is employed in the country, has a social security card (known as an AMKA) and pays for public health insurance, they will have to pay their own medical bills for most primary care visits. public hospitals in Greece are still generally adequate and there are still professionals who do their best to deliver quality care. The biggest downside is week-long waiting periods in order to receive care.

It is recommended that a person travelling to Greece should avail of full travel insurance or private health coverage if that person intends to stay any length of time.

Expatriates who are working in Greece and pay regular contributions to social security may be entitled to full or subsidised healthcare benefits. In such cases, private health insurance can cover the portion of the bill that cannot be covered by the government.

The Greek education system is administered by the Ministry of National Education and Religious Affairs. By law, all children between six and 15 years old are required to attend school, although many children begin school from the age of five.

The schooling system in Greece is divided into three levels:

After finishing gymnasio, children also have the option of attending a more practically focused Vocational Training Institute (IEK). In their final year of school, students write the Pan-Hellenic National Exams which determine their eligibility for tertiary studies.