Montenegro, country located in the west-central Balkans at the southern end of the Dinaric Alps. It is bounded by the Adriatic Sea and Croatia (southwest), Bosnia and Herzegovina (northwest), Serbia (northeast), Kosovo (east), and Albania (southeast).

Montenegro’s administrative capital is Podgorica, though its cultural centre is the historical capital and older city of Cetinje. For much of the 20th century Montenegro was a part of Yugoslavia, and from 2003 to 2006 it was a component of the federated union of Serbia and Montenegro. 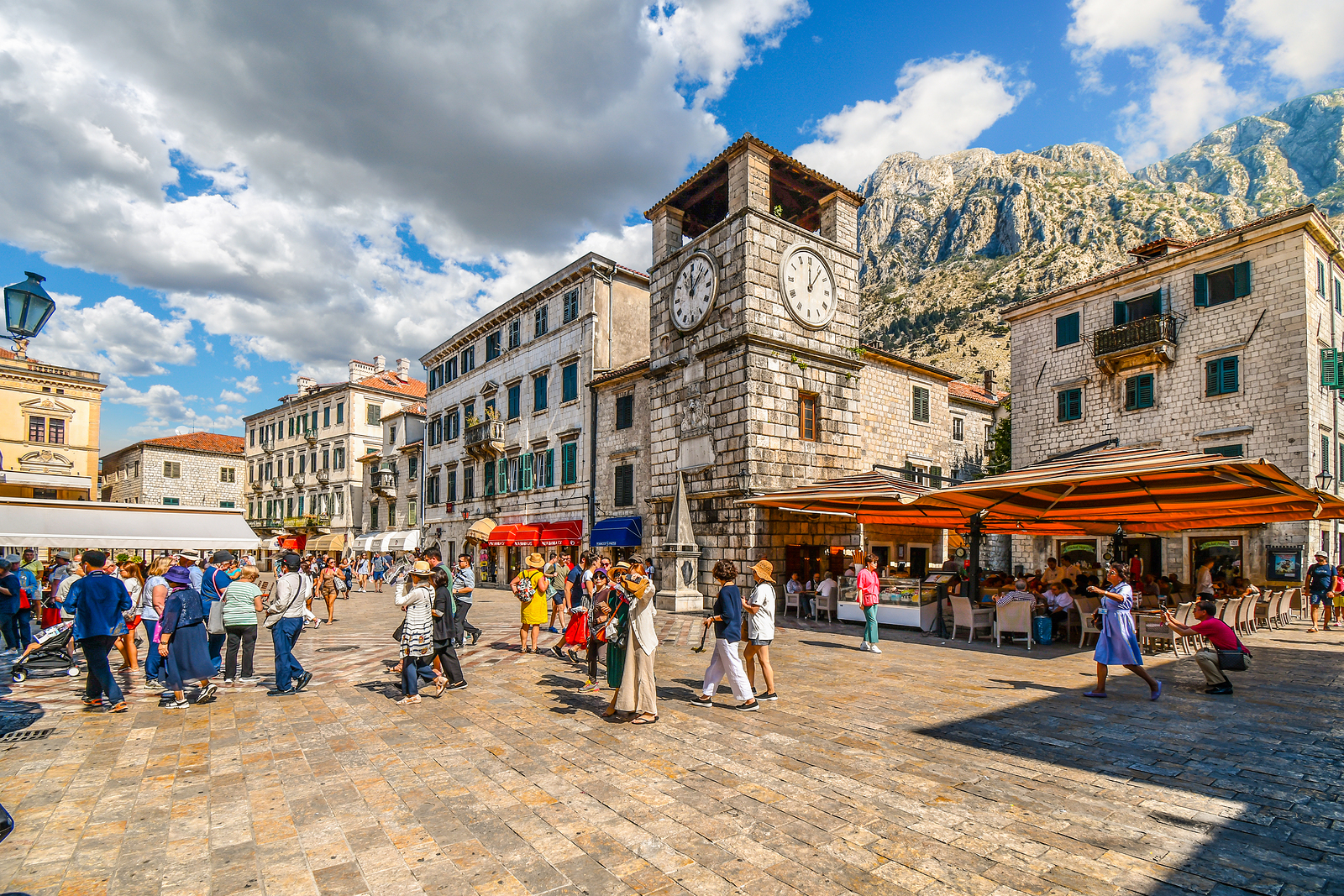 The country’s names—both Montenegro (from Venetian Italian) and Crna Gora—denote “Black Mountain,” in reference to Mount Lovćen (5,738 feet [1,749 metres]), its historical centre near the Adriatic Sea and its stronghold in the centuries of struggle with the Turks. Alone among the Balkan states, Montenegro was never subjugated. The old heartland of Montenegro, in the southwest, is mainly a karstic region of arid hills, with some cultivable areas—e.g., around Cetinje and in the Zeta valley. The eastern districts, which include part of the Dinaric Alps (Mount Durmitor), are more fertile and have large forests and grassy uplands. The drainage system of Montenegro flows in two opposite directions. The Piva, Tara, and Lim rivers follow northerly courses, the Morača and Zeta rivers southerly ones.

Montenegro’s lower areas have a Mediterranean climate, with dry summers and mild, rainy winters. Temperature varies greatly with elevation. Podgorica, lying near sea level, is noted for having the warmest July temperatures in the country, averaging 81 °F (27 °C). Cetinje, in the Karst region at an elevation of 2,200 feet (670 metres), has an average temperature that is 10 °F (5 °C) lower. Average January temperatures range from 46 °F (8 °C) at Bar on the southern coast to 27 °F (−3 °C) in the northern mountains.

Montenegro’s mountainous regions receive some of the highest amounts of rainfall in Europe. Annual precipitation at Crkvice, in the Karst above the Gulf of Kotor, is nearly 200 inches (5,100 mm). Like most areas along the Mediterranean Sea, precipitation occurs principally during the cold part of the year, but in the higher mountains a secondary summer maximum is present. Snow cover is rare along the Montenegrin coast, averaging 10 days in karstic polje depressions and increasing to 120 days in the higher mountains.

Differences between Montenegrins and Serbs are a matter of continuing controversy. Although isolated from each other for centuries during the Ottoman period, when Albanian families came to dominate the intervening Kosovo region, both groups retained their Orthodox religious traditions and many other common cultural attributes—including the Cyrillic alphabet. Because of such obvious commonalities, most Serbs see Montenegrins as “Mountain Serbs,” and many—but certainly not all—Montenegrins see themselves as Serb in origin.

Fluctuations between a Serb and a Montenegrin identity have been reflected in census figures. In 1981, for example, more than two-thirds of the residents of Montenegro identified themselves as Montenegrin, while only a tiny percentage reported themselves as Serb. By the early 1990s those proportions had changed to about three-fifths and one-tenth, respectively. In the early 21st century almost half of the population was identified as Montenegrin and about one-fourth as Serb. The largest non-Serb minorities are Bosniaks (Muslims) and Albanians, the former concentrated in the northern mountains and the latter along the Adriatic coast. Nearly three-fourths of the population of the coastal community of Ulcinj is Albanian.

During the long period of separation from Serbia, Montenegrins developed characteristics and institutions of their own. For example, they did not adhere to the Serbian Orthodox Church but were led by their own metropolitan until the Montenegrin church was absorbed into the Serbian patriarchate in 1920. In addition, Montenegrin pronunciation is closer to Croatian than to Serbian. A strong nationalist movement grew alongside Montenegrin resentment of Serbian attempts to minimize their distinctiveness. Many (but by no means all) Montenegrins joined Bosnians, Croats, and Serbs in insisting that what is spoken in each of their respective countries is a language distinct from neighbouring languages, despite mutual intelligibility. Thus, they prefer that their language be called Montenegrin. Montenegrin, Serbian, Bosnian, Albanian, and Croatian are all recognized by the constitution as official languages.

Although the country is endowed with only limited areas of suitable soil and climate, farming dominated Montenegro’s economy until the mid-20th century. Less than one-tenth of the land is farmed, and about two-fifths of this is devoted to grains. In upland areas the principal agricultural activity is sheepherding. With woodlands covering more than two-fifths of Montenegro, forestry is economically important. Despite the country’s significant seacoast, commercial fishing is negligible.

Bauxite, the principal raw material for aluminum, is Montenegro’s chief metallic resource. It is found principally near Nikšić. Significant hydroelectric power is produced at the Piva River plant on a tributary of the Drina and at the Peručica installation on the Zeta River. Montenegro also has a thermoelectric plant, which burns lignite mined near the town of Pljevlja.

Established in 1993, the Central Bank of Montenegro is responsible for monetary policy, the development of a sound banking system, and payment operations. The German mark was declared the sole means of payment in Montenegro in November 2000, and in 2002 Montenegro’s official currency became the euro, the EU’s single currency. A stock market began operating in 1996. Most enterprises in Montenegro have begun privatization, and it is expected that most of these will eventually trade on the exchange.

Because of the small numbers of nonagricultural workers, labour union activity is minor and local. Montenegrin taxes include personal and corporate income taxes, excise duties, sales taxes, property taxes, taxes on financial transactions, and use taxes. Montenegro was constitutionally required to remit a portion of its revenue to federal institutions while part of Yugoslavia but stopped doing so in 1998.

Montenegro’s 150 miles (240 km) of seacoast have long been a major tourist destination. Attractive landscapes, picturesque old stone houses, and beaches draw both domestic and foreign tourists. The kings of prewar Yugoslavia had a summer palace near Miločer, and the postwar regime transformed the ancient fishing village of Sveti Stefan into a luxury resort. The city of Ulcinj—whose architecture has been influenced by the Greeks, Byzantines, Venetians, and Asians—is an important tourist destination.

Montenegro’s first railroad was a short line connecting the port of Bar with Virpazar on Lake Scutari. During the period between World War I and World War II, another rail line was constructed between Podgorica and Nikšić. Improvements continued during the communist era, including extension of a rail link in 1986 to the newly constructed Albanian system. The completion of the long-planned route between Bar and Belgrade in 1976 extended Montenegro’s rail lines considerably. About three-fifths of the country’s roads are classified as modern. The country’s sole maritime port is the small community of Bar; closed briefly in the early 1990s, it reopened in 1996.

Eight years of primary education are compulsory in Montenegro, beginning at age seven. Four years of secondary education also are available, divided between two types of schools: general secondary schools, which prepare students for universities; and vocational schools, which offer training that usually leads to admission to two-year technical colleges. The University of Montenegro, located in Podgorica, was founded in 1974.