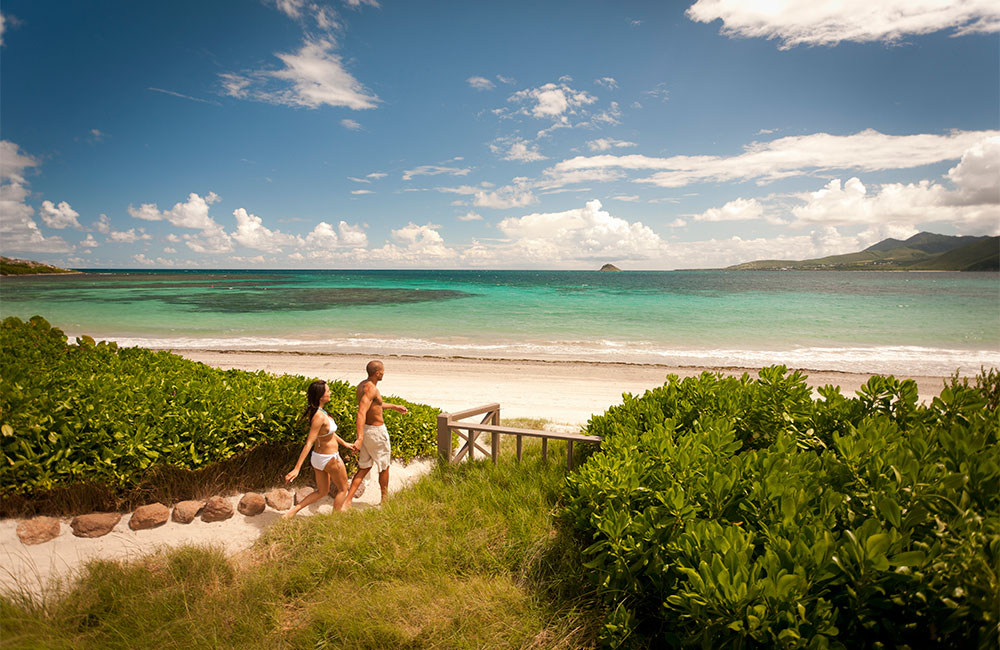 Saint Kitts is 23 miles (37 km) long and 5 miles (8 km) wide, is oval in shape, and has an area of 68 square miles (176 square km). A volcanic mountainous ridge down the centre forms a semicircle around a plain in the southeast. Mount Liamuiga (formerly Mount Misery), with a lake in its forested crater, is the highest point (3,792 feet [1,156 metres]). The soil—except in the mountains—is light and porous. Most of the beaches are of black volcanic sands. The island is well watered and fertile, with warm summers and somewhat cooler winters. The average summer temperature is about 86 °F (30 °C) and the average winter temperature about 81 °F (27 °C). The annual precipitation averages 55 inches (1,397 mm), and the rainy season is from May to November.

Nevis, surrounded by coral reefs, lies 2 miles (3 km) southeast of Saint Kitts across a channel known as The Narrows. The island is circular, and it consists almost entirely of a mountain, Nevis Peak (3,232 feet [985 metres]), which is flanked by the lower Round Hill (1,014 feet [309 metres]) on the north and by Saddle Hill (1,850 feet [564 metres]) on the south. Its area is 36 square miles (93 square km). The soil of Nevis is clay studded with volcanic boulders. The climate is similar to that of Saint Kitts. Both Nevis and Saint Kitts lie in a tropical hurricane (tropical cyclone) belt; hurricane season is between August and October.

The population is largely black, with a small mulatto (of mixed African and white heritage) minority. There are also very small South Asian and white groups. The official language is English. The main religious denominations are Anglican and Methodist, with a smaller number of Roman Catholics. Both Saint Kitts and Nevis have traditionally had high levels of emigration, offsetting natural increases and enabling the islands to maintain a fairly stable population. 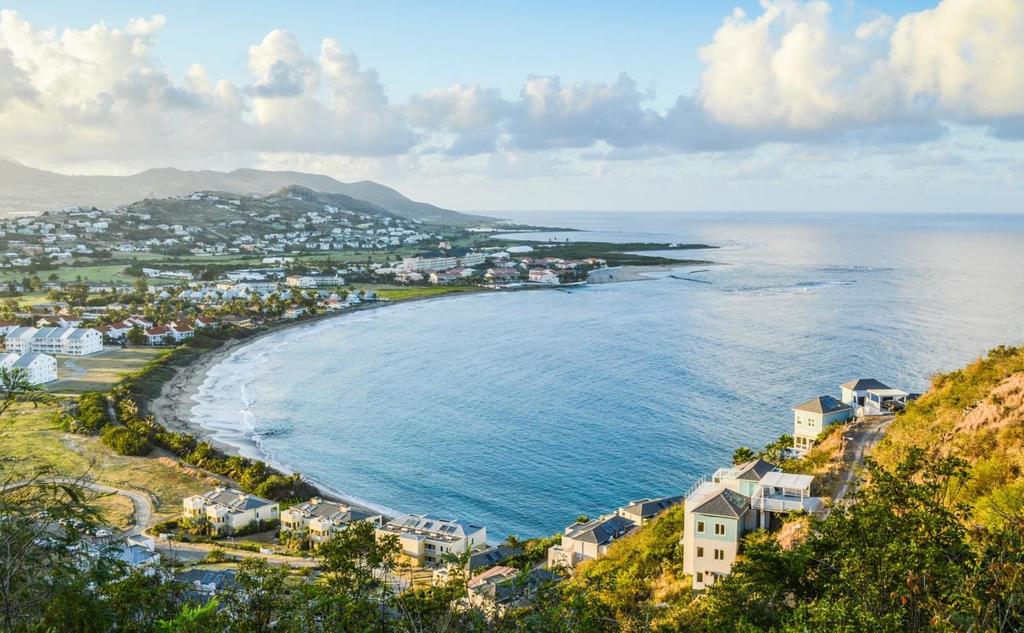 The cultivation of sugarcane—once a nationalized industry and the mainstay of the Saint Kitts and Nevis economy—ceased in 2005 following a decline in overseas markets. It was replaced by tourism as the most-important economic sector. Crops now cultivated include vegetables and fruits, chiefly coconuts.

The Eastern Caribbean Central Bank serves as the country’s monetary authority, and the Eastern Caribbean dollar is the official currency. Light industries in Saint Kitts and Nevis produce items mainly for export from imported materials. Products include electronic equipment, batik-dyed fabrics, and other clothing and furniture. Remittances from emigrants form an important source of foreign exchange. The United States, the United Kingdom, and Trinidad and Tobago are the principal trading partners. There is a deepwater port at Basseterre, and each island has an international airport; Robert L. Bradshaw International Airport, is on Saint Kitts, and Vance Amory International Airport, is on Nevis.

Since independence in 1983, the Federation of Saint Kitts and Nevis has been an independent member of the Commonwealth, with the British monarch as its head of state. An appointed governor-general represents the crown. The prime minister, who together with other ministers is a member of the cabinet, is the head of government. The monarch and the National Assembly constitute the parliament, some of whose members are appointed. The island of Nevis enjoys a certain amount of autonomy within the federal structure; it has its own premier and legislature, and the constitution provides for it to secede from the federation if certain procedures are followed. There is universal adult suffrage.

Education is compulsory for all children from the age of 5 to 16, provided by a countrywide system of free public schools as well as private church-affiliated schools. There are several hospitals and many health centres throughout the islands. Tropical diseases have been virtually eliminated. Most of the state’s cultural activity is concentrated in the capital, Basseterre.

Christopher Columbus visited Saint Kitts on his second voyage in 1493 and found it inhabited by Carib people. He named it Saint Christopher for his patron saint. The name was shortened to Saint Kitts by settlers under Sir Thomas Warner, who, arriving from England in 1623, established the first successful English colony in the West Indies at Old Road on the west coast. The French first arrived on the island in 1625 and established a colony of their own in 1627 under Pierre Bélain, sieur d’Esnambuc. Divided during the 17th century between warring French and English colonists, Saint Kitts was given to Britain by the Treaty of Utrecht of April 1713 and remained in British possession despite the capture in 1782 of Brimstone Hill by the French. The island was restored to Great Britain by the Peace of Paris treaty signed by Britain and France at Versailles in 1783.

Nevis was also sighted by Columbus in 1493. The island’s name derives from Columbus’s description of the clouds atop Nevis Peak as las nieves, or “the snows,” when he sighted the island. It was settled by the English in 1628 and soon became one of the most prosperous of the Antilles. Although it suffered from French and Spanish attacks in the 17th and 18th centuries, it maintained a sound economic position until the mid-19th century. 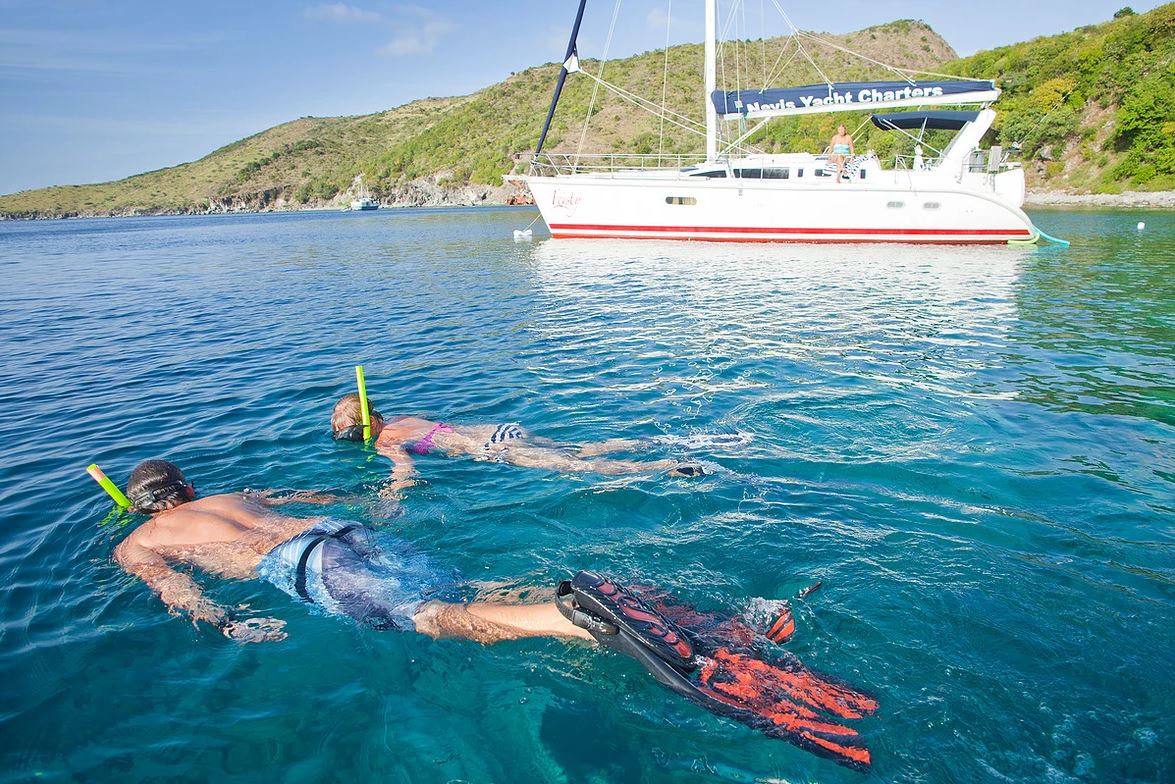